If you want to take action to protect California's public health, take action!  AB 2109 is a very simple bill. If a parent wishes to  send her child to school without the required vaccines the parent must document having had a face-to-face conversation about vaccine risks and benefits with a licensed health care provider.

That's it.  That's all.  AB 2109 doesn't take away "parent choice" or "attack legal vaccine exemptions" or "force parents into a relationship" or any of the other specious objections the anti-vaccine forces, lead by the National Vaccine (mis)Information Center (NVIC) VIC and the Canary Party, have ginned up.

The action you need to take is to fax and email  the members of the Senate Appropriations Committee, tell them why you support AB 2109, and ask them to join you.  A draft letter is at the bottom of this post.  It is also available as a Word document on the Facebook page,

So far, this is what we know:

Silent or not stating position:

If any of these senators represent you, you may also wish to contact the Senator via phone, to express why you support AB 2109.

I am writing to ask you to vote in favor of AB 2109 when it comes before the Senate Appropriations Committee on August 5, 2012.

The current law is extremely lax. It merely requires that the parent sign the statement below:

AB 2109 is very simple. It merely requires that if a parent wishes to send her child to school without the required vaccines the parent must document having had a face-to-face conversation about vaccine risks and benefits with a licensed health care provider.

I support this bill for several reasons. There are wide variations in rates of Personal Belief Exemptions (PBE). Some public schools have rates as high as 81%. Children who are unvaccinated against measles are 22 to 224 times more likely to contract disease. This represents a cost to government and to individuals: the 2008 San Diego measles outbreak was caused by an unvaccinated child with a PBE; eight of the nine measles-infected children old enough to be vaccinated had PBEs. It cost about $177,000 to contain; the figure does not include the hospitalization costs for several of the children or parents’ lost wages.

According to figures published by the California Department of Education, there were 12,256 incoming kindergarteners with PBEs in the 2011-2012 school year. (see http://www.cdph.ca.gov/programs/immunize/Pages/ImmunizationLevels.aspx)

I was on a conference call with Dr. Pan on Tuesday, July 24, 2012. In that call, Dr. Pan explained that his sense is that many parents choose the PBE option out of convenience or fear, rather than conviction. The student may have fallen behind in one or more of the required vaccines due to lack of time, access to medical care, or financial issues. The parent then takes the option of signing the PBE at the time of school entry out of convenience. In other cases, parents may be unsure of the value of one or more vaccines, and rather than discuss these concerns with a trained health care provider, will sign the PBE. AB 2109 will address both these issues.

The question for your committee is, what will it cost the state if AB 2109 becomes law? An AB 2109 opponent claimed that it would cost “millions”. If “millions” means $2 million, that means that each PBE at 2011-2012 rates would cost the state around $163.00, which is a ridiculously high figure.

It is my sense that the cost to California will be modest, and would be somewhat offset by savings in public health expenditures. Without examining each of the 7,327 schools in the data table cited above, schools with a high percentage of low-SES students tend to have a higher rate of fully-vaccinated students, compared to schools in high-SES areas. The data on private schools are equivocal; those influenced by anthroposophical notions or Waldorf philosophy tend to have high PBE rates while more main-stream private schools tend to have high rates of fully-vaccinated students.

I hope you will agree with me that this bill is a benefit to California’s health.

Listening to those opposed to AB 2109: Dawn Winkler

These were the instructions from the Chair:

The "Dawn" is Dawn Winkler, a long-time anti-vaccination activist, who is determined to defeat AB 2109

Dawn's "83 of 105" figure was from "research" was evidently done by Amy Templeton Helstrup. Evidently she called pediatric practices in a 30-mile radius of her zip code.  I'm not sure what she asked; I can imagine that you could phrase the question in such a way to get the scheduler to refuse.  So pediatric practices are refusing to take new families who are vaccine-refusers.

Yes, evidently Dawn lost a daughter to SIDS, which she insists is vaccine-induced.

HAPI is Health Advocacy in the Public Interest.  In 2004 they sent 4 vaccine syringes for testing to Doctor's Data, a notorious lab.  It's not clear to me that Doctor's Data is even competent to test vaccines.

I'm not sure what the next tweet is about.  Evidently the anti-vaccine forces proposed a number of amendments to the bill, but I can't find texts for them.

This was the end of Winkler's testimony.  Up next is the D-list actor, Rob Schneider

Listening to those opposed to AB 2109: Julian Whittaker, MD

Oh the "more vaccines makes the infant mortality go up" canard AND the "vaccines didn't save us canard".  Straight out of the vaccine rejectionists' playbook.  For the former, see Science Based Medicine.  For the latter, see Respectful Insolence.

How is a simple conversation "harassment"?

The government mandates behavior all the time.  Think of seat belts.

Whitaker probably doesn't know that the awards amount to about 1.3 awards per million doses of vaccines.  No, he's using the "the amount  awarded is so large, vaccines must be dangerous".  Nope. I have no idea what the 40 million children are.

Will parents be told the truth about the risks?  I hope so.  Again and again, the risks of all diseases we vaccinate against are much higher than the risks form the vaccination.

The Merck suit is the new stick to convince people that all pharma is corrupt.

I shouldn't be surprised.  This is how Whitaker describes himself on his facebook page:


A pioneer of alternative medicine, Dr. Whitaker is an expert on nutritional supplementation and has been offering guidance on natural therapies for over 30 years.

Description
Julian Whitaker, MD - For more than 30 years, I've been practicing alternative medicine and giving my patients drug-free and surgery-free options for heart disease, diabetes, and other common conditions.

He blames vaccines for autism and other disorders.

And he's actually proud of being recognized by a predatory quack:
•30th Anniversary Award of Excellence, Burzynski Clinic, 2008

And by other quacks.
•American Physician Award, Reflexology of America, 2006

Listening to those Opposed to AB 2109: Intro

I have been keeping an eye on what the opposition has been saying.  A twitter user named CaliVaxChoice live-tweeted last week's Health Committee Hearing.  Here they are in order, with my comments interspersed.

I imagine the strictness had to do with the conduct of the anti-AB2109 contingent at previous hearings on this bill, not following the instructions, going overtime, and so forth.

Say CaliVaxChoice, herd immunity not just a claim; measles outbreaks not a fiction.

I'm not sure what "claims internet is misguided" is about, unless referring to outright misinformation, distortions, and fear-mongering at sites such as NVIC, VaxChoice etc.

I have to come up with a name for the "It's Always About the Money".  The elided claim here is that pediatricians are supporting AB 2109 because they will all make much, much more money if this bill passes.

Well that is an ugly little comment.  I need to look up the death rate from pneumococcal disease before the advent of the vaccine.

It's not a "claim" it's a fact that children unvaccinated against pneumococcal disease are X times more likely to catch the disease.  Golly, how hard is that to understand?

History of Vaccines on AB 2109

The excellent and informative website, History of Vaccines, also has a blog, where  a fair and balanced article on AB 2109 was published. The conclusion:


While nothing in the bill states that healthcare providers will have a say in whether or not the children of parents who oppose vaccination will be vaccinated, some fear that this bill will intrude on that choice. On the other hand, those who support the bill point out that parents will be receiving reliable and professional information on the risks and benefits of vaccines and the risks of the diseases they are designed and proven to prevent--some of those risks being very serious. Yet to be determined, however, is whether requiring that parents be exposed to accurate medical information on the risks and benefits of vaccination--and the risks of vaccine-preventable diseases--will translate into reduced rates of vaccine refusal.

This is the first draft, as it has not been checked for accuracy by a health care provider or immunization professional.  Personally I think that this would have been helpful to the Health Committee. 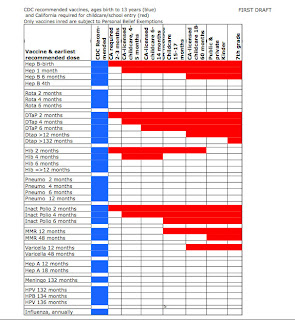 On to the Senate Appropriations Committee

The next step is the Senate Appropriations Committee.  As of this writing, the bill hasn't been calendared.